What Does IYKYK Meaning, Interesting Facts You Must Know 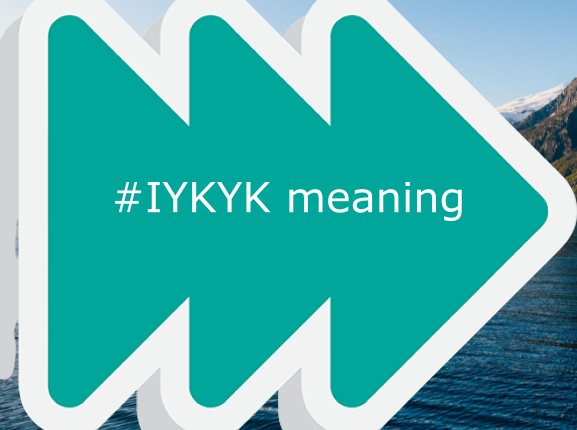 The unofficial form or short language people use on the internet to communicate to other people is called internet slang. People express themselves in a creative way using slang. It makes people more friendly, creative, and different. A highly popular and confusing slang people saw on the internet is ”IYKYK”. In addition Lol, Btw, Wyd, etc. we’ll hear slang usually in texts. In this article, we are going to discuss the iykyk meaning and how to use it properly.

What does the acronym ‘IYKYK’ mean or stand for?

If you are an active user of the internet you can surely notice that internet slang has suddenly become very popular nowadays. IYKYK will become popular on social media in 2020. According to Urban Dictionary, it actually dates back to 2016. iykyk means “if you know, you know”. It’s quite simple but ‘IYKYK’ is especially cryptic in its usage. Some people use this slang without knowing the true meaning.

“When you know, IYKYK, is an acronym for “if you know, you know.” This acronym denotes that a message or post will make logical sense to some people but not to others. Frequently, the message will contain a reference to a specific incident that will immediately stick out to people who are “in the know.” Both the uppercase IYKYK and the lowercase “iykyk” can be used.

Where IYKYK Comes From?

Iykyk first appeared in  December of 2016 on Urban Dictionary. It appeared on social media posts earlier. But ‘IYKYK’ become more popular when the American rapper Pusha T titled “If you Know you Know” in 2020 ‘IYKYK’ became more popular on social media. People use it mostly on hashtagging on TikTok, Instagram videos. Thousands of TikTokers posted videos with the tag ‘IYKYK’. However, It became a google trend in early 2020. So, the exact #iykyk meaning is “if you know, you know”. You can also use these hashtags on your social media page.

As people become more technically updated they find a way to save time. Popular social media users use DM for direct messages. Slang terms are connected to the technological world.

IYKYK is frequently used as a hashtag in the caption of a photo or video, particularly on social media sites such as TikTok and Instagram. Someone might, for example, upload a video of themselves at a party and title it, “Last night was insane!” #iykyk.” This indicates that something specific occurred at a certain gathering that only those present will be aware of.

How to Use IYKYK?

After knowing the iykyk meaning if you want to use this slang too, here are some ideas for you. Don’t use it for any official purpose. The slang is heavily used in text messages and IM Chats. Teenagers mostly use these for chatting. Don’t use it too much, people will make fun of you. If you experience something new, it can be anything like funny, weird, crazy. You can post a picture

A shared experience among an age group or upbringing is another common IYKYK situation. “When I’m in app and my camera is turned off #iykyk,” for example, someone might write. While the material of this article may make perfect sense to a teen who attended school during virtual classes, it may not make sense to someone who has never done so.

If you are following someone on Instagram or Twitter and they post something, a picture, or any tweet, it is tagged with IYKYK. This iykyk meaning will most certainly be of the inside joke variety, meaning you have to be there to understand what they’re talking about. Here are some examples of IYKYK.

When someone uses ‘IYKYK’ on a more private feed, like Instagram stories. Then ‘IYKYK’ means they are hinting at a specific group of their friends and acquaintances. The post is shared specifically for them. In a simple word, we can say if you are there you can understand otherwise you wouldn’t.

For example, we can say if you hang out with your friends for the past few days and some funny incident has happened. Therefore, you can share any picture of that day and hashtag ‘IYKYK’. That means only those friends will understand the situation.

We can see in our everyday life how things go viral. On the internet, people use slang terms. To discuss a range of inside jokes TikTokers are using it. The hashtags have become very popular currently it crossing 3.4 billion views.

Here a new option to create your caption

If you want to use the shopping site that creates a social posting with a subtle clue to an occasion, event, or mutual interest, not everyone who shares if you wish to use IYKYK. Don’t throw too much information away, or the post will stop being a fun, private joke between you and others.

Twitter user @rinnaelisse shared a picture of go-karts with the caption, “I’m this old” #iykyk”. The tweet received 1k likes and 420 retweets in a year. @singulardollarbill a TikToker uploaded a video using the hashtag and the video crossed 538,700 likes in three months. “If you know, you know” is an inside joke. It has a deeper meaning. Currently ‘IYKYK’ all over the place. To riff about anything from college extracurriculars to people using it.

Every social media user can notice that most of the users use short-term language to make interesting conversations. It is essential to know when you are using social media what social media acronyms and slang are, otherwise, you can’t enjoy social media. Not only social media but some acronyms are also used in business meetings too. Knowing about some common acronyms is very important. FB means facebook, DM means direct message. As well as some are trending acronyms like ‘iykyk’. iykyk meaning is if you know you know. So when you use these hashtags on social media make sure that you know the actual meaning otherwise may you get in trouble.

Some FAQs about IYKYK:

1. What does this Iykyk meaning?

The Iykyk meaning is “if you know you know”.

2. What does if you know then you know mean?

It means if you know about something.

3. Why is everyone using iykyk?

Everyone is using it as an inside joke. This is a short form. They are hinting at a specific group of their friends.

4. Where Does IYKYK Come From?

This acronym first appeared in the urban dictionary, in December 2016.

5. What does iykyk mean on TikTok and other social media?

Nowadays tiktokers are using this ‘iykyk’ to discuss an inside joke. That only a few people know.

6. Why do people say IYKYK?

“If you know, you know,” or IYKYK, is an acronym for “if you understand, you know.” This acronym denotes that a message or post will make logical sense to certain people and not to others.

It is frequently used as a hashtag on social media sites such as Snap, Tiktok, and Twitter.

It means I know karate.

9. How does everyone use this?

Everyone is using it as an inside joke.

10. Is IYKYK an extreme piece?

It is exclusively for casual settings

3 Healthcare Jobs You Can Get With a Public Health Degree

A complete guide about Instagram: a playbook for marketers