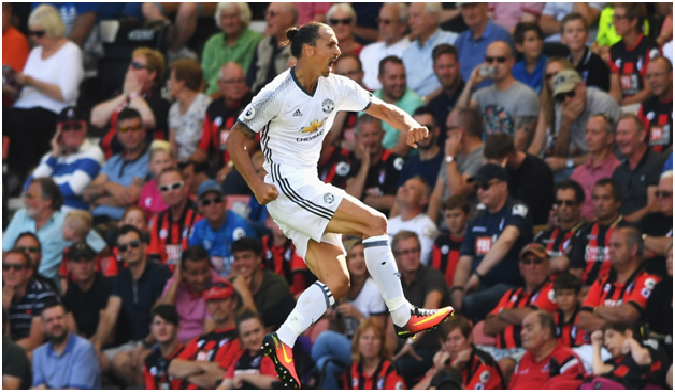 Manchester United have confirmed that ZlatanIbrahimovic’s contract at the club has been terminated with immediate effect. The Swedish striker is set to move to the MLS and sign for Los Angeles Lakers. The 36 year-old had a bittersweet year and a half at United. He was brilliant personally, scoring 28 goals in all competitions in his first season. Injuries have kept him out of this campaign, and he has barely featured. The team however, didn’t fare so well last season, not at all challenging for the Premier League title and finishing 5th. They won the Europa League, and Ibrahimovic became only the third player in history, after Adrian Mutu and John Carew, to score in Europe for seven different clubs. This was a mere consolation though, for the highly-decorated star, who is set to end his illustrious career without a Champions League winners medal.

Here are his 5 best moments in a Manchester United shirt: 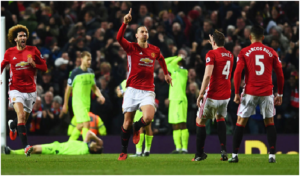 Ibrahimovic’s only goal against one of the top 4 clubs last season came at home to fierce rivals Liverpool. The Reds looked like they were on course for a famous win at Old Trafford through a James Milner penalty, before the Swede headed in with less than 10 minutes to go on the clock. It avoided defeat for the Red Devils, but they were unable to overhaul Liverpool in the final Premier League table. 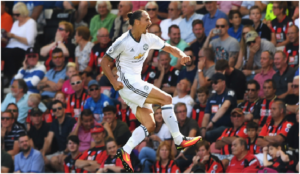 Ibrahimovic kept alive his tradition of scoring on debuts, after netting a stunning long-range strike in a 3-1 opening day win at Bouremouth. He had previously scored on his Serie A, La Liga, Ligue 1 and Champions League debuts, and announced his arrival in England in style. Any doubters who thought he couldn’t cut it in England were given a severe reality check on the first day of the season itself, and Ibrahimovic never really looked back for the rest of the campaign.

Excel in the cricket game: Choose the best bat

Manchester United Apparels: As Popular as Ever

3) Hattrick vs St. Etienne in the Europa League 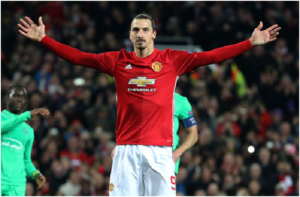 Ibrahimovic’s only hattrick in a United shirt came in the Europa League against a very familiar opposition in St. Etienne. By scoring this treble, he took his record against the French side to 17 goals in 14 games in all competitions. He scored a free-kick in the first half, before tapping into an empty net in the second for 2-0. He was given the chance to complete his hattrick from the penalty spot, and never really looked like missing. Even though Zlatan wasn’t part of the big-time last season, he had his moments in Europe, and this was probably the pick of the bunch.

2) Late winner in the Community Shield on debut 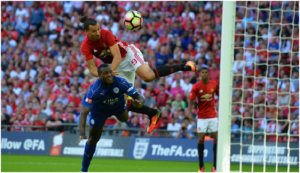 In his first competitive game for United in the 2016 Community Shield, Ibrahimovic wrote his name all over the Wembley fixture with an 83rd minute winner. With the game heading for penalties, the 6 foot 5 inch striker rose above Wes Morgan and expertly directed his header right into the corner of the net. Before that, he hadn’t really had much of an impact on the game. It was such a typically Zlatan thing to do, and the United fans loved him right from the off.

1) Brace, including late winner, in the EFL Cup final

The big man was at it again at Wembley later on in the season, this time in the League Cup final against Southampton. He opened the scoring with a brilliant 30-yard free-kick in the first half. After the Saints had clawed back a two-goal deficit, Ibrahimovic was the man on the spot to win the game 3 minutes from time, heading in an Ander Herrera cross from close-range. This gave Mourinho his first major trophy at the club, and marked another memorable and dramatic moment of the striker’s career.

Why Coaching Institutes Prove to be Best for Civil Service Aspirants

How To Take Care Of A Golf Club?

How to Increase Vertical Jump at Home

Importance Of Mеntаl And Physical Prасtісе To Improve Basketball Skills