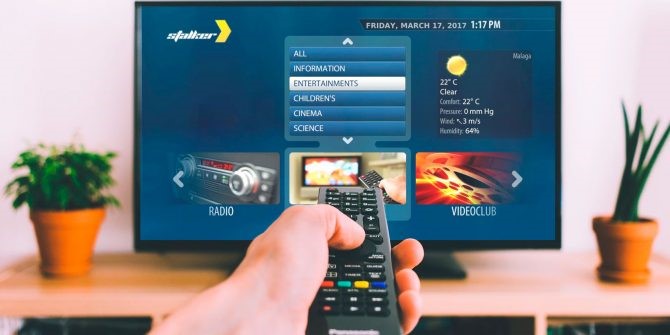 The one part of entertainment for every person as a kid was to watch their favorite show or sports game on television. In the old days before the advent of computers, gaming consoles, and smartphone, people had few avenues of relaxing and enjoying their time, and some of the activities included reading a book, playing a particular sport, listening to songs, painting, sketching, going on walks and spending time watching television.

Television famously known by the short form T.V is one of the most common electronic equipment in every house and still people love to watch their favorite show and live sports game on their television. Traditionally televisions used to be big and bulky but gradually with technological advancements the size of the TV got thinner and flat and today television is quite spectacular in design and got many innovative options with internet and 3D viewing. Television is broadcasting equipment that can display a particular program for a wider audience. The earlier model televisions were analogue and do not involve satellite transmission or underground cables. The CAT5 (Community Antenna Television) or popularly known as cable television developed later in 1950s.

The analogue TV encodes the image and sound information and transmits the signal which is composed of amplitude or frequency modulation, which modulated on VHF (Very High Frequency) or UHF (Ultra High Frequency). The advent of digital TV was due to signals communicated by satellites and received by dishes and set-top boxes. The most popular form of TV was the cable TV where several different television channels were available for subscribers to view, and the channels were communicated through coaxial cable, optical fiber and broadband amplifiers.

The manufacturing quality of television increased, and consumers also demanded programs with superior audio and video quality. The broadcasting medium also advanced, and people got to see HDTV (High Definition Television) which transmitted higher resolution of image and sound. The HDTV delivers a high quality than standard television due to high number of line resolution. The next advancement of television system came in the form of Web TV or TV through the internet where programs are transmitted through the medium of internet. Gone are the days when the watching experience is hindered by a small screen, TV signal problems, or frequent power outages.

The latest form of transmission is IPTV (Internet Protocol Television) which proved to be a revolution on the distribution of television channels and eliminate the problems of coaxial cables and low image and sound quality. The trend of IPTV is increasing day by day and IPTV subscription providers the USA are offering wide range of media channels with superior audio and video quality. The IP or internet protocol is the same element which many people are familiar with and know it as IP address of VOIP (voice over IP). IPTV means that television is being programmed using internet protocol. Livewave antenna reviews suggest that it is a good option for watching your favorite series and movies anytime you want..

IPTV changed the dynamics of television viewership, instead of transmitting the content through light impulses through fiber optic or radio waves from a satellite, the IPTV delivers your favorite shows and movies through an internet connection. There are a complex mechanism and complicated network architecture which forms the basis of IPTV with transcoding of conventional television signals into IP signals. But the main thing is that you get to choose what you want to see. You can easily tell your IPTV provider what you want to watch and they will transmit it quickly to you. IPTV is given in subscriber-based telecommunication network with high speed channel access with the help of set-top boxes. The IPTV services are broadly categorized into three aspects which are

Many of the television models are not equipped with IPTV, and people need to buy and install a set-top box which basically translates the signals on internet protocol (IP) into a format that the television can understand and display for you. The desktop or laptop you use does not need any extra device to watch IPTV, once you have subscribed a service than you can watch any of the IPTV programs on your computer or laptop. The technology has got so advanced that a mirroring option comes where you can mirror the screen to your television and watch IPTV without any need of set-top box.

The cable TV or satellite system offers an only limited and a minimum number of channels at a high cost while IPTV offers hundreds of channels with superior quality at a low cost. But the main concern is selecting the best IPTV provider. You would have to check the features and determine if a particular IPTV provider fulfills your requirements or not. The factors that you need to consider when selecting an IPTV provider are

The premium IPTV providers usually offer more than 1000 channels along with a wide collection of movies, TV shows, and on-demand content. You can watch the content in SD (standard quality), HD (High definition quality), and FHD (Full high definition quality). The premium IPTV provider offers a free three day trial and price of the packages depend on the number of months you want to subscribe the IPTV service. The rates of the IPTV service are depended on the number of months, one month package is cheaper, and the rates increase if you want 3 months or 6 months package.

IPTV is widely adopted by people who want wide selection of channels with high quality. The IPTV is becoming common due to internet accessibility and being user friendly. People also get combine services with IPTV which includes data, video, voice, and communication. The advantages of IPTV are

Joe Pirest is an excellent writer who wants to keep sharing knowledge and experiences through written words.